Jan 7, 2015 6:00 pm Former members of the popular vocal group, The 5th Dimension, Billy Davis, Jr. and Marilyn McCoo have been heralded as one of America’s most successful and beloved musical duos in history. With seven Grammys, fifteen gold and three platinum records to their name, the famous R&B duo and married couple have brought their message of love and happiness to their fans for over 40 years. Hear some of Marilyn McCoo and Billy Davis, Jr.’s biggest hits this season, including “You Don’t Have to be a Star (To Be in My Show)” and “My Reason to Be.” Opening for Marilyn McCoo and Billy Davis, Jr. is Stewie Stone, one of the comedy world’s best kept secrets. Given any topic or circumstance, Stewie Stone will have a witty response, and the charming comedian has become known for his witty rapport with audiences across the country. Stone has opened for major acts, including Roberta Flack, the Village People, and the Temptations, and has performed in major venues around the United States from Madison Square Garden to Carnegie Hall. As members of the wildly successful vocal group The 5th Dimension, Marilyn McCoo and Billy Davis, Jr. recorded a number of major hits, including “Up, Up, and Away,” “Aquarius/Let the Sunshine In,” and “Wedding Bell Blues.” After ten years with The 5th Dimension, Marilyn McCoo and Billy Davis, Jr. split from the group and began recording and performing as a duo. McCoo and Davis’s career only continued to climb after their departure, as the two enjoyed immediate success with the release of the #1 hit “You Don’t Have to be a Star (To Be in My Show),” which earned them a Grammy award for Best R&B Vocal Performance by a Duo/Group. Since then, Billy Davis, Jr. and Marilyn McCoo have performed across the world for a variety of audiences, including most notably Pope John Paul II and a number of U.S. presidents. As solo entertainers,. Marilyn McCoo and Billy Davis, Jr. have also enjoyed great success. In the 1980s, Marilyn McCoo hosted the popular television music series, Solid Gold, and recently, the award-winning recording artist appeared in the Broadway production of the musical Show Boat in the role of Julie. Like his wife and recording partner, Billy Davis, Jr. has also thrived on the stage, starring in the hit musical Blues in the Night as well as performing in a regional production of Dream Girls. Davis also released an album in the 1980s entitled Let Me Have a Dream, a religious recording completed in collaboration with Reverend James Cleveland. In their newest CD, The Many Faces of Love, Marilyn McCoo and Billy Davis, Jr. recorded a collection of love songs written by some of the most prolific songwriters of the 1960s and 70s. The album explores the ups and downs of their own relationship as a married couple, a theme that appears in many of their recordings and live performances. Drawing upon their personal combination of faith, love, and patience, McCoo and Davis try to impart a little bit of wisdom unto their audience with every performance they give through the medium of song. Marilyn McCoo and Billy Davis, Jr.’s performance at The Lyric Theatre this season celebrates over 40 years in the entertainment industry, featuring some of the biggest R&B, pop, and soul hits of the last half century. 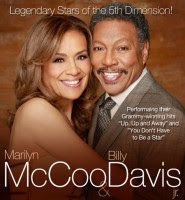