What was originally a small group of Senate staffers with a sense of humor became the rip-roaring comedy sensation that it is today. Capitol Steps makes even the most boring news stories hilarious. Drawing from headlines and insider information, the topical comedy show leaves no joke behind. Featured on national television from NBC to PBS, Capitol Steps has swept the nation with its witty quips and absurd skits.
Capitol Steps began back in 1981, when a collection of Senate staff members came together to present a collection of song parodies for an upcoming Christmas party. It was so well received on Capitol Hill that the staff members decided to take their show on tour. Now, over three decades later, Capitol Steps has become a national sensation, providing hours of comedy entertainment to thousands of audiences across the country. Although the members are no longer the original Senate staffers, their legacy lives on and the troupe still maintains excellence and a particularly crafted sense of comedic timing. Capitol Steps has expanded from the theater, performing their show, Politics Takes a Holiday on NPR four times a year.
The troupe touring today have worked in a total of 18 Congressional offices and have 62 years of House and Senate experience between them. Due to the incredible success of their tours, Capitol Steps have released 30 albums featuring their infamous song parodies, including the particularly topical Take the Money and Run – For President. Never afraid to push buttons and make enemies, Capitol Steps pokes fun at the craziness that is modern politics straight from the people that know it best. 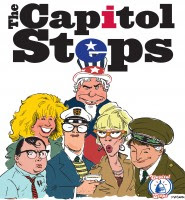