Last week we began our year end touring summary newsletter. We started reflecting on the past year and taking inventory of the 150 some performances we'd presented in 2013. We talked and laughed as we tallied the many cities and venues we visited on the journey. We'd pause, give a nod of affirmation at how grateful we are for all the wonderful opportunities to share the music and culture with so many extraordinary people we meet along the way.  Before we knew it though Friday had arrived and we had not finished the year end re-cap, so we set it aside to clear our heads over the weekend and planned to finalize it on Monday.
Well, Friday night rolls in and we were just hanging out around the house when we got a call from someone wishing us luck on the impending Grammy nominee announcement coming out that same Friday night, December 6, 2013-just 4 days ago!
What a surprise to see on the nominee list our April 2013 release "Dockside Sessions" by Terrance Simien & the Zydeco Experience! Yes, it was true, our latest CD has been nominated for a Grammy.Wow, were we speechless.
The 56th Grammy awards will be held in Los Angeles January 26, 2014, and friends we will be there! We'll share the experience with long time friend Zachary Richard and Hot 8 both from Louisiana, and both nominated in the same category as our CD. Our friend and colleague, and another true gentleman, Allen Toussaint is also nominated in the American Roots field.  Of course the other Terence-our friend Terence Blanchard is also nominated in Jazz.  Congrats to all these accomplished artists, including our producer & legendary drummer George Receli and our own Zydeco Experience band!
This great honor is dedicated to Terrance's Mother, Ethel Rene Simien who left us on November 15, 2013 after a long and painful battle with RA.  She was an extraordinary woman whose love for her children and family always came before her own daily struggles. On November 21st,  21 Roman Catholic priests from the Lafayette Diocese were there to send her off- a fitting farewell.
What is zydeco?
Zydeco is American roots music. It's an important southern roots music tradition that has helped define the cultural identity of Louisiana, the south and the musical landscape of this country.
Zydeco is the music of the black and mixed race French speaking Creoles of Louisiana. Zydeco is commonly confused with Cajun music. Cajun music is the music of the Acadians; the French speaking Canadians exiled from the maritime provinces, or Acadie region of Canada. While there is some sharing of instruments, repertoire and language there are distinct differences in the musical influences and  cultures that informed the genre. Louisiana Creoles are a unique mix of European French and Spanish, (heavy German in Terrance's family too) Native American, African and Caribbean. The Simien family is documented in history books as one of the first families of Louisiana.Zydeco was born from a multicultural heritage, or as some like to say a "gumbo of cultures" that blended together in this unique way that happened  only in Louisiana.
Louisiana Creole and zydeco music history is long and rich. Terrance pioneered our Creole for Kidz! educational program to help better inform not only his own community about their heritage, but also the cultural tourist and the music lover alike. Most people now want more from their music experience. They want the back story and they want to know the origins. No doubt we all enjoy music purely for its entertainment value, however we are smarter now about everything we consume. From our films to our food, our books and our clothing, our cars and furniture-we want details. Music is no different and have we got those details for you- in the bag y'all! 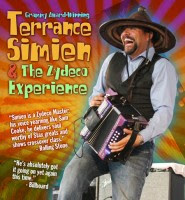