An Acoustic Evening with Keb' Mo'

Join Singer-songwriter, guitarist and 3-time Grammy winner Keb Mo’ is an intimate acoustic performance.  His music is a living link to the seminal Delta blues that traveled up the Mississippi River and across the expanse of America — informing all of its musical roots — before evolving into a universally celebrated art form. His distinctive sound embraces multiple eras and genres, including pop, soul, folk and jazz as well as the singer-songwriter movement. For Keb Mo, the common bond between these influences is the underlying storytelling ethic, the power of song to convey human experience and emotional weight.  Keb Mo promises to get down with The Lyric this January with his style of Delta Blues as a modern take on a classic music style.
Born Kevin Moore in South Los Angeles to parents originally from the deep South, Mo’s music is an expression of the artistic and cultural journey that has transformed the blues, and his own point of view, over time.  This blues singer, guitarist, and songwriter began his career recording with notable acts like Jefferson Airplane and Papa John Creach before beginning his solo career in the early 1980s. As a solo artist, Keb Mo has won three Grammy Awards and had top notch acts like Bonnie Raitt and Jackson Browne contribute to his work. He has appearec in television shows including The West Wing and Touched by an Angel, and portrayed the legendary blues singer and guitarist Robert Johnson in the movie Can't You Hear the Wind Howl?
The Reflection is the first new studio album by Keb Mo since Suitcase in 2006 earned a sixth Grammy nomination . These twelve songs are the product of an important period of personal and professional growth for the artist formerly known as Kevin Moore. In that time, he started a new family; moved from Los Angeles to Nashville; built a state–of–the–art home studio, and founded his own label, Yolabelle International, distributed by Ryko and the Warner Music Group.  But The Reflection is not, in essence, a blues album. In sound and spirit, it's closer to the work of African–American "folk soul" singer/songwriters like Bill Withers, Bobby Womack, and Terry Callier. 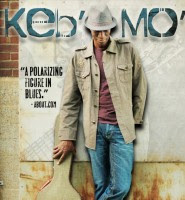