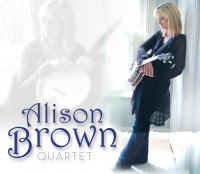 The Alison Brown Quartet (banjo, piano, bass and drums) offers up an astonishingly original instrumental sound that blends jazz, bluegrass, Latin and folk music, pushing the banjo out of its familiar Appalachian settings and into new musical territory.

"Like James Taylor’s voice or B.B. King’s guitar, Alison Brown’s banjo is an instrument possessed of a unique sonic signature and an inescapable beauty....An artist who never ceases to delight."-- Billboard Magazine

"Banjo music is seldom thought of as 'mellow' or, dare we say 'pretty,' but Alison Brown makes it so in the jazz-classical-pop-folk-Latin mix of the Alison Brown Quartet. As a true ground-breaker, [she's] opening up whole new vistas for an instrument once solely associated with  pickin' 'n' grinnin'."  -- USA Today

Alison Brown (banjo/guitar): Alison began playing the guitar at age 8 and picked up the banjo 2 years later.  As a teenager in San Diego, she honed her skills performing around Southern California as a member of several different bluegrass bands.  At 16, she won the Canadian National Banjo Championship and, before heading off to college, recorded an instrumental album with fiddler Stuart Duncan.  Alison earned an AB from Harvard University in History and Literature, an MBA from UCLA in Finance and spent 2 years working as an investment banker before deciding to return to music full time.  After touring extensively as a member of Alison Krauss and Union Station and later as band leader for Michelle Shocked, she formed the Alison Brown Quartet in 1993.  Alison has recorded 7 critically-acclaimed solo albums (including the Grammy-nominated Simple Pleasures and Replay, which features the Grammy-winning track “Leaving Cottondale) and has toured with the Quartet throughout the US and abroad.  She has been featured on CBS Sunday Morning, NPR's All Things Considered, NPR's Weekend Edition, UPI's Radio Network and on the cover of Dirty Linen, Sing Out! and Bluegrass Now Magazines.  In addition to her work as a recording artists, Alison is also the co-founder of Compass Records.

John R. Burr (piano/keyboards): John R. was first drawn to the piano at the age of 10 when he heard Vince Guaraldi's playing on the Peanut's animated TV specials.  Born in Erie, Pennsylvania and raised in northern California, John R. developed an original, lyrical style that taps a variety of blues, gospel and modern jazz influences.  In addition to his work with the ABQ, John R. has recorded and toured with Paul McCandless, Michael Manring, Maria Muldaur and Jeff Beal, among others.  He is also featured on Windham Hill's Piano Sampler II.  Burr's highly acclaimed instrumental solo album Piedmont Avenue  released on Compass Records in 1998 to rave reviews

Garry West (bass): Garry was raised in Atlanta where he began his musical studies at age 11 on the saxophone.  He graduated to the bass 4 years later.  After attending the Berklee School of Music in Boston, Garry moved to Nashville and toured with country artists Patty Loveless and Mark Collie before signing on with rhythm and blues legend Delbert McClinton and folk/pop songstress Michelle Shocked.  He has also performed with The Band, Duane Eddy and Taj Mahal.  In addition to his work as a bassist, Garry is also a busy producer and has been featured in Bass Player Magazine.  When he's not on the road, (and even when he is), Garry runs Compass Records, the independent record label which he and Alison co-founded.

Kendrick Freeman (drums):  Bay Area drummer and percussionist Kendrick Freeman is one of the most versatile drummers in acoustic music.  His jazz studies have included work with Eddie Moore and George Marsh; with Marsh, he received a National Endowment Grant for Jazz Studies in 1980.  Kendrick has enjoyed a parallel career in traditional drumming and dance, having studied with accompanied artists from Ghana, Congo, Haiti and Cuba.  From 1989 to 1993, he was musical director for San Francisco's premiere Haitian dance company, Groupe Petite la Croix, performing at the San Francisco Ethnic Dance Festival in 1989, 1992 and 1993.  Currently a resident of Petaluma CA, Kendrick teaches a Latin jazz ensemble at Sonoma State University and has taught at the California State Summer School for the Arts.  He has recorded with acoustic marvel Joe Craven and cutting-edge dobroist Rob Ickes among others.  Kendrick joined the Alison Brown Quartet in 1999.