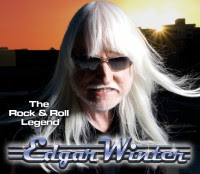 Rock & Roll Legend, Edgar Winter, live on The Lyric Stage!  From his critically acclaimed debut release, Entrance, he has demonstrated his unique style and ability to cross the genre lines and do the unexpected. Creating the #1 hit “Frankenstein” and the ever popular “Free Ride”, They Only Come Out at Night was released in 1973, peaked at the #3 position on the Billboard Hot 200 and stayed on the charts for an impressive 80 weeks. It was certified gold in April 1973 and double platinum in November 1986.
Edgar invented the keyboard body strap early in his career, an innovation that allows him the freedom to move around on stage during his multi-instrument high-energy performances. He was also the first artist to feature a synthesizer as the main instrument in a song. “Frankenstein” revolutionized rock and roll and opened up a whole new world of possibilities with experimentation and sound. Edgar Winter’s live shows consistently receive rave reviews. His music is always evolving and he is a master at stretching his skill and imagination to produce amazing results. He continues to thrill audiences with his live performances, always remaining on the cutting edge of music and style.