Next to Normal ~ The Tony & Pulitzer Prize Winning Musical 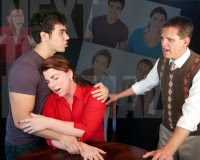 Winner, 2009 Tony Awards
Winner, 2010 Pulitzer Prize
Winner, Critics Choice for "One of the Year's Ten Best Shows"
The most talked about new show on Broadway is a “brave and breathtaking musical” according to The New York Times and a show that “pushes Broadway in new directions” says Rolling Stone. With a thrilling contemporary rock score, Next to Normal is an emotional powerhouse about a family trying to take care of themselves and each other amid the humor and turmoil of mental illness.
Winner of three 2009 Tony Awards including Best Musical Score and the 2010 Pulitzer Prize, Next to Normal was also chosen as “one of the year’s ten best shows” by critics around the country, including The Los Angeles Times, The Washington Post, Rolling Stone and The New York Times.
Starring:
Karin Leone*,
Robert Dawson, Anthony Nuccio, Colleen Broome
Xander James, Michael Hurst II
Director: Jared Walker
Musical Director:  Evan Ferrar    Lighting & Scenic Design:  Marc Clark
*   *   *   *   *
The Story:  NEXT TO NORMAL tells the story of a mother, Diane Goodman, who struggles with bipolar disorder and the effect that her illness has on her family. This contemporary musical is an emotional powerhouse that addresses such issues as grieving a loss, ethics in modern psychiatry, and suburban life. With provocative lyrics and a thrilling score, this musical shows how far two parents will go to keep themselves sane and their family’s world intact.
“The best musical of the season — by a mile. It’ll pin you to your seat.” – Rolling Stone
“It is much more than a feel-good musical. It is a feel-everything musical." - The New York Times
This production contains adult language and adult content.
*member of Actors Equity Assiciation
http://www.lyrictheatre.com/show/4729-next-to-normal-the-tony-pulitzer-prize-winning-musical
Posted by Lyric Theatre at 4:30 AM