The 20 Best Small Towns to Visit in 2015
From sea to shining sea, our top picks for the most amazing American small towns to see this year
Smithsonian.com

When it comes to places to take a vacation, it’s easy to think of America’s big cities: Chicago, New York, San Francisco, Miami. But America is filled with wonders that are less heralded but no less magnificent, from the ancient forests of the Pacific Northwest to the moss-draped bayous of the South. Along the way, there are sparkling caves, thundering waterfalls, quirky festivals, historic buildings, inspiring art and world-class food—all packed into towns with a smaller population than many college campuses.

For the fourth annual version of our list, we once again worked with the geographical information company ESRI to sort the nation’s small towns (those with a population under 20,000) according to their number of cultural attractions, historical sites, nature opportunities and food-and-drink destinations, then researched to find the places commemorating important anniversaries, openings, renovations, recoveries and other milestones in 2015. Think of this list not as a ranking but as a menu, with something for every taste—whether it’s country bluegrass, Florida’s white beaches or Alaska’s blue mountains.

Perched on the most biodiverse lagoon ecosystem in the Northern hemisphere, the St. Lucie Inlet, Stuart is surrounded by opportunities to revel in nature and the arts as well as indulge your inner history buff. See the sea turtles on warm summer nights at the nearby Hobe Sound Nature Center, (gently) touch a stingray at the Florida Oceanographic Coastal Center, or visit the House of Refuge—a former haven for shipwrecked sailors operated by the United States Lifesaving Service and now a beautiful historical museum. Stuart also boasts the newly renovated Lyric Theatre, a former silent movie palace now hosting concerts and art-house movies. And this July, Florida’s “Treasure Coast” commemorates the event that gave the region its name—the 1715 hurricane that struck Florida’s east coast, sinking 11 Spanish galleons laden with New World silver and gold. The summer, area events include a two-day conference at the Vero Beach Museum of Art (about an hour north of Stuart), lectures and public exhibitions. 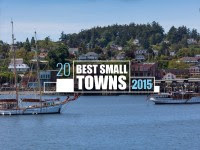