STUART – There aren’t many women in theatrical management, so the announcement that Kia Fontaine has been named the new Executive Director of the Lyric Theatre is exciting news. John Loesser, who has led the Lyric for the past 16 years, will become Artistic Director, focusing on fundraising, public relations and artistic programming. The new positions were announced by the Lyric’s Board of Directors and took effect April 1.

Fontaine, who has been Assistant Executive Director since 2008, will be responsible for day-to-day operations and theater management. Before coming to the Lyric, she served as Historic preservation officer and deputy city clerk for the city of Fort Pierce. She is a life-long resident of the Treasure Coast. Her interest in the arts spans most of her life.

“I was 6 when I performed in my first opera, ‘La Boheme,’” she said. “I was a street urchin. It was the Treasure Coast Opera Society. I was also in the Children’s Choir at church. When I performed in the opera, I knew that what I wanted to do was be on stage or managing.”

Fontaine continued to audition and perform in area choirs, plays and operas.

“My father started a production company,” she said. “He would rent venues and we would put on shows. In 2001, we met John Loesser during the City of City of Fort Pierce Centennial celebrations. We got to talking. I called John when an opening came up and I had a theater background. He said, ‘Let’s get together and talk.’” We met for coffee.

I was working for the City of Fort Pierce. He told me he wanted me to think about it because it was a big change in my life. I slept on it and said, ‘I’m game. Let’s talk.’ He put me in every facet: hospitality, stage management, marketing, contract administration and overseeing the facility and operations. He said, ‘Give me five years and I will train you in the theater.’”

Fontaine plans to take things slowly in the beginning.

“I’d like to continue John’s legacy,” she said. “He’s done such an incredible job during his tenure. He took it from a small community theater to a well-known, recognized performing arts center. I want to keep the tradition of excellence alive. What is established here is fantastic.”

Fontaine said the biggest challenge is maintaining and building an audience.

The new director said that the upcoming season will be announced in May and ticket will go on sale to members May 26.

“Next year will have a fabulous lineup of shows,” she said.

“There’s something for everyone and a few big names. Memberships start at $35 members get first crack at tickets. It helps support the mission of the Lyric, to provide the community with a home for the performing arts that entertain, educates and stimulates the growth of artistic integrity and experience for everyone,”

For his part, John Loesser said he is putting the Lyric in good hands.

“I can’t think of a better person in the performing arts world to assume command of the Lyric,” he said in the press release announcing the changes.

“In my entire career, I have never known anyone that I could have recommended that would put the Lyric in better hands than Kia, and I look forward to working with her for many years to come.”

Writers note:
I have worked with Kia Fontaine for the entire time she has been at the Lyric, and she has always answered my requests for information or interviews with patience, professionalism wit and humor. She is an asset to the Lyric and it is wonderful to see that tear in the theatrical glass curtain. 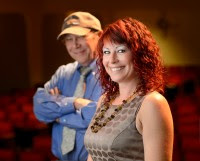 Posted by Lyric Theatre at 9:27 AM