STUART — Get out your platform shoes, your bell bottoms, your mood rings and your polyester body-hugging shirts. It’s the 1970s and the best music is on the radio.

Now “On the Radio-The Sounds of ‘70s” relives that era in a show at the Lyric Theatre Dec. 29. The show, produced by Kevin Black, creator of “Ballroom: South Beach Style” and “Cirquesco,” stars Mimi J, a former backup singer with Bobby McFerrin and Gloria Estefan.
She and her dancers will perform dozens of hits from the 1970s by everyone from ABBA to Carole King to Stevie Wonder to Gloria Gaynor. The audience is invited to sing along, and who could help it?

Mimi J spoke recently about the show and why she put it together.

While disco makes an appearance, this is not a show about white suits, disco balls and the Hustle.

“In this show, I wanted to give people an idea of other styles of music,” she said. “It’s not all about disco. I wanted to showcase the other genres that were so pivotal. I love the soul section, with Gladys Knight. I love the Carole King medley. She was a phenomenal songwriter. There’s Fleetwood Mac and Tina Turner. It’s hard to say what is your favorite. I compiled all of my favorites. It’s like trying to choose your favorite child. They’re all different, but you love them all the same.”

The show has ballads and upbeat songs and the audience is cordially invited to join in.

“It’s a party,” Mimi J said. “Throw theater etiquette out the window and get up and dance. I’m going to be getting down and dancing with them. Let loose. The number one rule is to have a great time. That’s my purpose and goal in doing this show.”

The singer has a musical theater background and performed in national and international touring companies of several Broadway shows.
“I was a background singer,” she said. Singing in the background morphed into getting roles in the forefront. I was always afraid of that. When I got the first try, I was scared out of my wits. I kept getting cast in the lead.”

Most performers would consider that an enviable position. Mimi J said her friends and family urged her to create her own show.

“I said, ‘You’ve got to be kidding.’ Then I said that it was not too bad an idea, to pick things I am comfortable with. It reminds me of being in my house and dancing in front of the mirror or with a broomstick. That’s what centers me. I feel most comfortable in the privacy of my own home. I still get jitters. If you don’t have a little stage fright, it’s time to retire.”

The singer said that the Lyric audiences are wonderful.

“They’re respectful and polite, but there’s love from that audience. They’re rocking out.”

So come to Mimi’s house and join the party. It’s gonna be groovy. 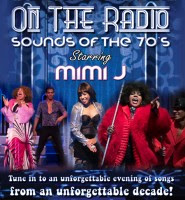