A Night of Lyrical Poetry Set to Original Music

This December, the Mediaeval Baebes are coming to Stuart. The British choral ensemble is known for their reinterpretations of mediaeval, religious, and pagan songs, often writing and performing works in archaic languages such as Middle English and Mediaeval Welsh. They have received particular acclaim for their Christmas albums, featuring classic holiday songs including “We Three Kings” and “Away in a Manger.” Founded in 1996, the Mediaeval Baebes are a 6-part choral group founded by Katharine Blake. A former back-up singer for the experimental musician Nick Cave, Blake gained prominence in the music industry for her role as the lead singer of the rock group Miranda Sex Garden. She now devotes herself full time to the Mediaeval Baebes. Despite their name, the ensemble does not only perform medieval music. Blake points out, most of what the Baebes perform is medieval poetry set to original music written by the band members. In total, the choral ensemble has released eight studio albums, three of which reached the top of the U.K. classical music charts. Their Christmas album, Of Kings and Angels, enjoyed widespread critical acclaim in Europe after its release in 2013, earning a top ten spot on the U.K. charts. The Mediaeval Baebes will perform at The Lyric Theatre on December 2nd at 7:00pm. Tickets are available online at www.LyricTheatre.com. 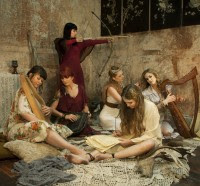