Next to Normal: The Tony & Pulitzer-Prize Winning Musical

Winner, 2009 Tony Awards * Winner, 2010 Pulitzer Prize * Winner,
Critics Choice for "One of the Year's Ten Best Shows"
“The best musical of the season — by a mile. It’ll pin you to your seat.” – Rolling Stone
“It is much more than a feel-good musical. It is a feel-everything musical." - The New York Times

Next to Normal, a “brave and breathtaking musical” according to The New York Times and a show that “pushes Broadway in new directions” says Rolling Stone, is a gripping and honest portrayal of one suburban household grappling with mental illness. This winner of three Tony Awards, including Best Musical Score and the Pulitzer Prize, was also chosen as “one of the year’s ten best shows” by critics around the country, including The Los Angeles Times, The Washington Post, Rolling Stone and The New York Times. This emotional powerhouse musical is set to a thrilling contemporary rock score, with book and lyrics by Brian Yorkey and music by Tom Kitt.

Next to Normal got its start Off-Broadway in 2008, where it was met with great reviews, winning the Outer Critics’ Circle Award for Outstanding Score. After a brief stint playing at the Arena Stage in Washington, D.C., Next to Normal debuted on Broadway in April of 2009. That year, the musical was nominated for eleven Tony Awards, eventually winning awards for Best Original Score, Best Orchestration, and Best Performance by a Leading Actress. Next to Normal also won the Pulitzer Prize for Drama, becoming the eighth musical in history to receive the honor. Since its run on Broadway, the production has spread across the globe, premiering in Peru, Germany, Israel, and many more countries.

The award-winning show deals tenderly with critical contemporary issues from modern psychiatric practices to living life in suburbia. Next to Normal follows the story of a suburban mother, Diane Goodman, as she comes to terms with her own bipolar disorder and about a family trying to take care of themselves and each other amid the humor and turmoil of mental illness. Karin Leone, most recently seen as Ms. Adelaide in The Lyric’s Guys & Dolls in Concert, will reprise her role as tortured mother Diana Goodman as seen in Next to Normal at The Lyric in 2013. Under Jared Walker’s provocative direction, Next to Normal is “much more than a feel-good musical. It is a feel-everything musical." - The New York Times 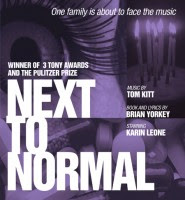 More Info
Posted by Lyric Theatre at 7:02 AM