Feb 5, 2015 7:00 pm From their start at the intimate Station Inn in downtown Nashville to the main stage at Carnegie Hall, The Time Jumpers have swept the nation with their boot-stomping, heel-clicking Western style swing music. Featuring eleven members, including the 20-time Grammy-winning artist Vince Gill, The Time Jumpers are a group of top-dollar studio musicians looking to have a great time. The versatile swing ensemble has toured with some of the most successful country artists in recent memory, from Bonnie Raitt to Jimmy Buffett. The Time Jumpers includes 11 members, each a master of his (and, in one case, her) instrument. Alphabetically—which is the only diplomatic way to present such a phalanx of evenly matched talent—they are Dennis Crouch (upright bass), Larry Franklin (fiddle), Paul Franklin (steel guitar), Vince Gill (vocals, electric and acoustic guitars), “Ranger Doug” Green (vocals, acoustic rhythm guitar), Andy Reiss (electric guitar), Dawn Sears (vocals), Kenny Sears (vocals, fiddle), Joe Spivey (fiddle, vocals) Jeff Taylor (accordion, piano) and Billy Thomas (drums, vocals). Initially designed as a part-time hobby, The Time Jumpers were established in Nashville in 1998, comprised of a few country music veterans. Their extensive experience and youthful energy quickly brought them a group of devoted fans in the Nashville area, eventually expanding across the country. Their reputation spread, and soon major recording artists would stop by the Station Inn to play alongside the eleven-member ensemble, including Kings of Leon, Norah Jones, and Robert Plant. Although the lineup has changed over the years, The Time Jumpers have stayed devoted to providing quality swing music to audiences around the United States. Their live album, Jumpin’ Time, released in 2007earned The Time Jumpers two Grammy nominations and a major segment on the NPR radio show All Things Considered. The Time Jumpers’ success is due in part to their versatility. The swing group makes an effort to write songs that cover all facets of the human experience, from love, to mourning, to light-hearted shenanigans. The Time Jumpers’ latest self-titled album marks their first studio project and indicates a new period in the group’s artistic career. The Time Jumpers’ recent success and growing fan base has made it impossible for the group to stay in the smaller Station Inn, and so the group has moved to the larger 3rd and Lindsley nightclub near downtown Nashville. 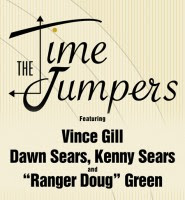