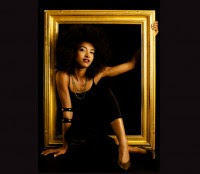 Since upsetting Justin Bieber fans everywhere after winning the Grammy Award for Best New Artist in 2011, Esperanza Spalding has swept the nation with her cool, controlled jazz riffs and earthy vocals. The Oregon native is a celebrated prodigy, recognized by her teachers and her audience as a powerful upright bassist in tune with her own rhythm. Esperanza’s music has impressed and inspired listeners all over the world, including President Barack Obama, who chose the young musician as the sole artist to perform in his honor at the 2009 Nobel Peace Prize Ceremony.
Esperanza Spalding was raised in Portland, Oregon in a nurturing musical environment. Although her mother’s dedication to music inspired the young girl, Esperanza credits her interest in performing to YoYo Ma’s performance on an episode of Mr. Roger’s Neighborhood that Spalding watched when she was 4. Esperanza had taught herself the violin a year later and played with the Chamber Music Society of Oregon until she left as a concertmaster at the age of 15. In high school, Esperanza dabbled with a variety of instruments including the oboe and clarinet, but found her true love when she picked up a bass for the first time. The aspiring musician left high school when she was 16 and enrolled on a music scholarship at Portland State University. Shortly after, Esperanza received a full scholarship to Berklee School of Music and became an instructor by the age of 20, the youngest instructor in the institution’s history.
Despite her academic involvements as a Berklee instructor, Esperanza Spalding continued to record and produce critically-acclaimed albums over the next few years, slowly rising in popularity. Her Grammy win in 2011 has only further inspired and encouraged Esperanza’s artistic creation. As she insists, “the spotlight can actually directly serve the music.” And, the spotlight is certainly shining. Spalding has released 4 solo albums over her career, impressing audiences with her multi-lingual vocal performances and smooth, soulful bass playing. Esperanza’s album Chamber Music Society was the best selling contemporary jazz album of 2011 and the jazz artist had the honor of performing at the 84th Academy Awards, singing “What a Wonderful World” with the help of the Southern California Children’s Chorus.
Thank you for supporting The Lyric Theatre, see you at the show!

http://www.lyrictheatre.com/show/3679-esperanza-spalding
Posted by Lyric Theatre at 12:00 AM